Michelle Obama recently spoke at the American Library Association (ALA) conference in New Orleans, Louisiana. She headlined the General Opening Session to promote her new book Becoming from Crown publishing, which will be released on November 13, 2018.  In this deeply felt memoir, Ms. Obama reflects on the influences and life events that helped her become a successful wife, mother, lawyer, author, advocate, and First Lady of the United States, and in its telling inspires others (particularly girls and young women) to become their most thoughtful and compassionate and best selves. 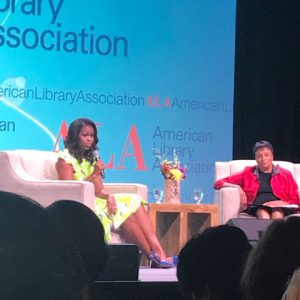 Obama and Hayden at ALA

Ms. Obama credits her parents, Marian and Fraser Robinson, for her becoming the person she is.  Her father suffered with multiple sclerosis for much of his adult life and she grew up watching him struggle every morning to move around the house with his crutches as he got ready for work.  He struggled stoically and after decades working blue-collar jobs put Michelle and her brother, Craig, through Princeton University.  Her parents’ work ethic imprinted on young Michelle and always propelled her to do “what Marian and Fraser Robinson would expect [her] to do.”  Later, during her husband Barack Obama’s presidency, her mother, who lived on the third floor of the White House, continued to demonstrate this same work ethic by declining the White House staff’s assistance and doing her own laundry and other household chores.  She taught her granddaughters, Malia and Sasha, to do for themselves in this same way and imparted other lessons to help the girls remain humble and focused on the significant things in life.  Many of these lessons occurred early in the girls’ lives, before the White House years, when Ms. Robinson stepped in to help Ms. Obama with the girls after she had lost a great babysitter.  Her mother’s quickness to fill this void and her gratitude at being able to rely on her mother sparked Ms. Obama’s advocacy for affordable childcare and, in a particularly funny aside at the ALA conference, shared how this experience reminded her that her mother would “kill someone for her grandchildren.”

Throughout the night, Ms. Obama shared funny anecdotes from her time in the White House, such as dropping down to do pushups with Desmond Tutu and the heightened security measures that the Secret Service enforced for her daughters’ sleepovers with friends, and even more hilariously, her daughters’ prom nights: “Prom with eight men with guns–Barack and I were very happy about that.”  But all the laughter aside, Ms. Obama imparted the audience with significant life lessons for girls on their journeys to becoming young women and later, professionals, mothers, and advocates themselves.  She described the vulnerability she felt trying to maintain a career and keep her daughters sane and her household solid during her husband’s “rocket ship ride” of a career.  Early in the beginning of this ride, Ms. Obama was approached to return to the practice of law and during those negotiations, summoned the courage within herself for the first time to ask for a salary that reflected her true worth and a flexible schedule that accommodated her daughters’ needs.  At the ALA conference, Ms. Obama told the audience that stepping up in this moment was critical to her becoming who she is today, as it would be for every member in the audience and for each individual woman, because “as women, you have to ask for what you need.” 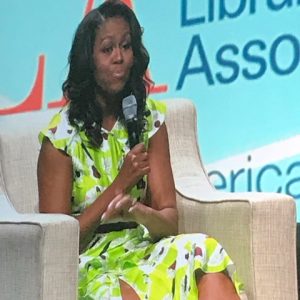 The other significant life lesson that Ms. Obama imparted on the audience was that parents have an obligation to “be good people in the world for [their children] to see every day.”  To this end, Ms. Obama has always found it important for her daughters to see her building and fostering strong and healthy friendships with other women.  She consistently makes time for her friends.  This was particularly true during the White House years when she and her girlfriends and all their daughters would gather at Camp David for healthy food and wine, some exercise, and lots of laughs.  After encouraging the women in the audience to build this network and village of women, Ms. Obama playfully punctuated the discussion with this funny confidential: “Barack is my best friend; but, he doesn’t know that I have more fun with my girlfriends sometimes.”

In her new book Becoming, Michelle Obama takes pride in the “ordinariness of [her] extraordinary story” and hopes it inspires other girls and young women on their journeys to becoming nurturing life partners, caregivers, professionals, advocates, and people.